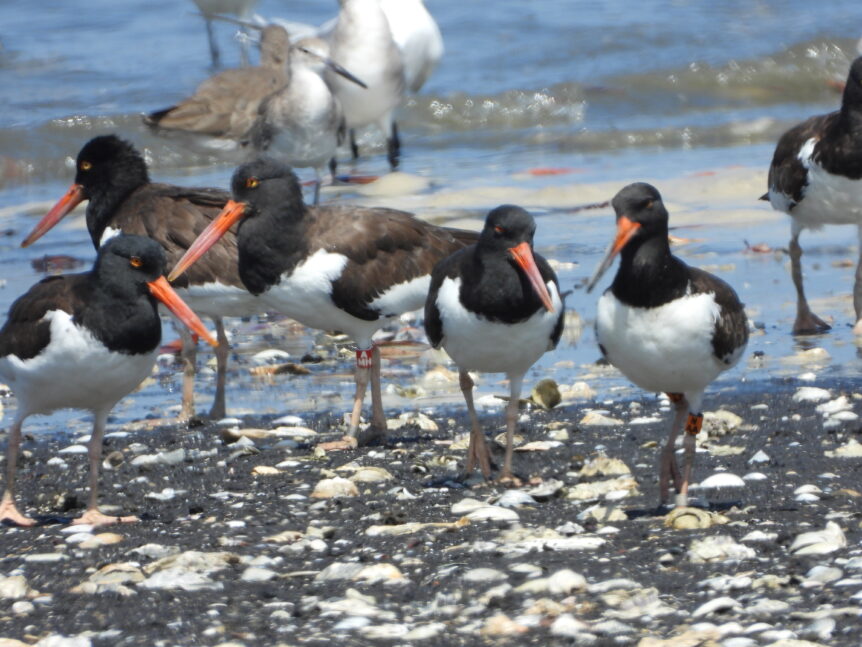 It is 12:40 am on Tuesday 3 November 2020.  A category 4 hurricane is whipping the Caribbean coast of Nicaragua where my family live. While I am writing, I am checking in with my parents constantly to hear news.. The models predict that Hurricane Eta will hit Wawa Bar, the beach where 18 years ago I identified an American Oystercatcher (Haematopus palliatus), that turned out to be the first record for Nicaragua. What a coincidence, that I am now writing about Oystercatchers! 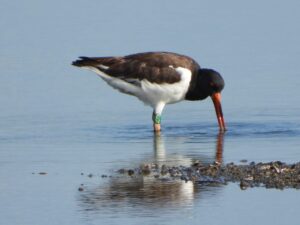 Every year in September, I am excited thinking about the newly-banded American Oystercatchers (Haematopus palliatus palliatus) that will arrive with thousands of other migratory shorebirds to the coastal zone of the Gulf of Fonseca. Shared between Nicaragua, Honduras and El Salvador, the Gulf of Fonseca is located on the Pacific coast and supports a mosaic of habitats that are vital for shorebirds, including inter-tidal mudflats, beaches, shrimp farms, saltpans , natural salt flats, mangroves and freshwater wetlands. Although the Pacific coasts of Central America are more than 7000 kilometers long, there are few sites where shorebirds stopover in large numbers to restock their energy before continuing their migration. Some other species, such as the American Oystercatcher, adopt these areas as their non-breeding grounds and arrive to spend the entire boreal winter. In addition to these migrants, there is a very small resident population, with a maximum count of 10 individuals present in the Gulf during May.

In December 2012, I was part of a team of ornithologists in Nicaragua, which began to explore the Estero Real Delta, in the Nicaraguan section of the Gulf of Fonseca. Until then Central America had serious monitoring gaps and it was not clear which species of shorebirds used its coasts. During our work we observed a group of color-banded American Oystercatchers; Orlando Jarquín, of the Quetzalli group, contacted the American Oystercatcher Working Group and, to everybody’s surprise, they were identified as individuals ringed on the eastern seaboard of the United States where the species breeds. Thanks to the Oystercatcher banding program, it was revealed that during the non-breeding season some individuals cross the Gulf of Mexico, where they have been observed in Punta Mosquito, Mérida and Puerto Cortez in the Honduran Caribbean, from there overflying the mountains to arrive at their destination, the Gulf of Fonseca. As we increase our monitoring efforts, we increase our knowledge of the stopover sites and non-breeding areas of these shorebirds. 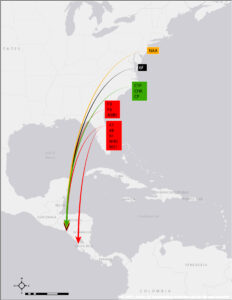 The first Oystercatcher that was observed was in the Estero Real Delta in December 2012. It had a black ring with the code 6F and was seen with 32 other individuals. Black 6F was banded in 2006 by Alex Wike on Metomkin Island, Virginia as a fledgling.  In 2013, Black 6F was seen again accompanied by Red F6 which was banded on South Wolf Island, Georgia in September 2005 by Brad Winn and Barry Harrington. In 2016, jointly with 76 other individuals we observed Red 49, 48 and 47 banded in Florida in 2005 and Red F3 banded in Georgia in 2005.

From 2012 until 2020, there have been at least 60 re-sightings in the Gulf of Fonseca of 27 individuals banded in Georgia, North Carolina, Florida and New York, demonstrating a strong connection between the east coast of the USA, which is on the Atlantic Flyway and the Pacific coast of Central America which is on the Pacific Flyway. In September 2019 the Quetzalli group, the Honduran Ornithological Association (Asociación Hondureña de Ornitología – ASHO) and SalvaNatura of El Salvador performed simultaneous counts in the Gulf of Fonseca. These counts recorded 1.9% of the biogeographic population of Haematopus palliatus palliatus (231 individuals). During the count, 16 ringed individuals were observed. The simultaneous counts in the Gulf have enabled us to discover that some banded individuals feed on the Nicaraguan side of the Gulf and rest on the Honduran side during the same day.  Red 47 has even been observed in El Salvador and in Nicaragua in different years. 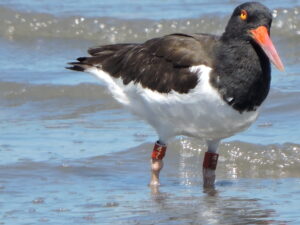 Until 2017, the seasons ended with maximum counts of 89 individuals, observed most frequently feeding on the mudflats of the Estero Real Delta and resting on the dikes of the Finca Acuícola Real shrimp farm, at that time managed by the Farallones group. Unfortunately, the beginning of the harvest season coincided with the 2017-2018 migration. Given that Neotropic Cormorants (Phalacrocorax brasilianus) feed on the shrimp, the farming practice was to scare the birds away using gunpowder which maintained them at a distance. The disturbance caused by the excessive use of gunpowder caused the complete abandonment of this roosting  and feeding site by the end of 2018. This remained the case until September 2019 when 28 individuals were observed with Red 48.

In this same period, the shrimp farm was acquired by the SEAJOY group, with whom the Executive Office of the Western Hemisphere Shorebird Reserve Network (WHSRN) is now working to address the issues of disturbance. Work has begun on the identification and implementation of good aquaculture practices that integrates the needs of shorebirds. One of the principal themes of this work is to reduce the disturbance of the roosting areas of the shorebirds. Although many of the 86 American Oystercatchers have not yet returned, the hope is that, little by little, the Oystercatchers will come back to their former wintering and roosting site.

In contrast to the situation in Nicaragua, the number of records in El Salvador has increased and a total of 132 individuals were recorded resting at a saltpan in the Bahía de la Unión. Of these, nine individuals had been banded on the East Coast of the USA and two of these had been previously observed in the Estero Real Delta. In this migration season (2020-2021), the first record was in September 2020 in the Estero Real Delta, with Green CJ5 bandedin 2014 by Lindsay Addison at Phillips Island in North Carolina. During October, Cristian Zúñiga observed Red W40 at Guanacaste, Costa Rica which was banded at Anastasia Estate State Park, Florida by Janell Brush and Joseph Marchionno in May 2020.

The American Oystercatcher is a perfect illustration of the theme of this year’s World Migratory Bird Day – “Birds Connect Our World”. It is an excellent ambassador that unites researchers, working groups, reproductive sites, stopover sites and non-breeding areas. Each one of these sites is fundamental for the survival of the species and many other migrants, but we must all work together to strengthen their conservation and protection; achieve more sustainable systems of production; and create a responsible citizenry that contributes to conservation by reducing the principal threats to the Gulf of Fonseca which includes the loss of a roosting site habitat, disturbance of non-breeding areas and, of course, climate change, which forebodes an increase in extreme events such as Hurricane Eta, and directly affects the populations of birds and their habitats.